Our unique leadership philosophy that makes us stand out from the rest.

“One does not acquire knowledge without practical application.
Learning solely about leadership does not make a good leader”.

Choosing to collaborate with Esprit de Corps entails that you will receive a completely personalized service. Our leadership and team building coaches will first establish an organizational diagnosis to identify your objectives and obstacles, and then use it to create an exciting and engaging program for you and your colleagues.

Our interventions incorporate principles of movement learning that will help create healthy habits to be used in a variety of situations.
The goal of our programs is to create a feeling of trust, cohesion, shared responsibility among participants and provide leadership and performance tools to overcome obstacles and complete challenges.

Whether you take part in our challenge programs, conferences, leadership or management coaching, you and your teams actively engage with the material. This unique experience will have a lasting effect on everyone involved.

Our methodology to support companies relies on 2 intervention axes: a human performance model and a psychometric tool which measures the “esprit de Corps”.

Having learned from years of experience accompanying strong teams, we have established 6 pillars crucial to ensure team success. 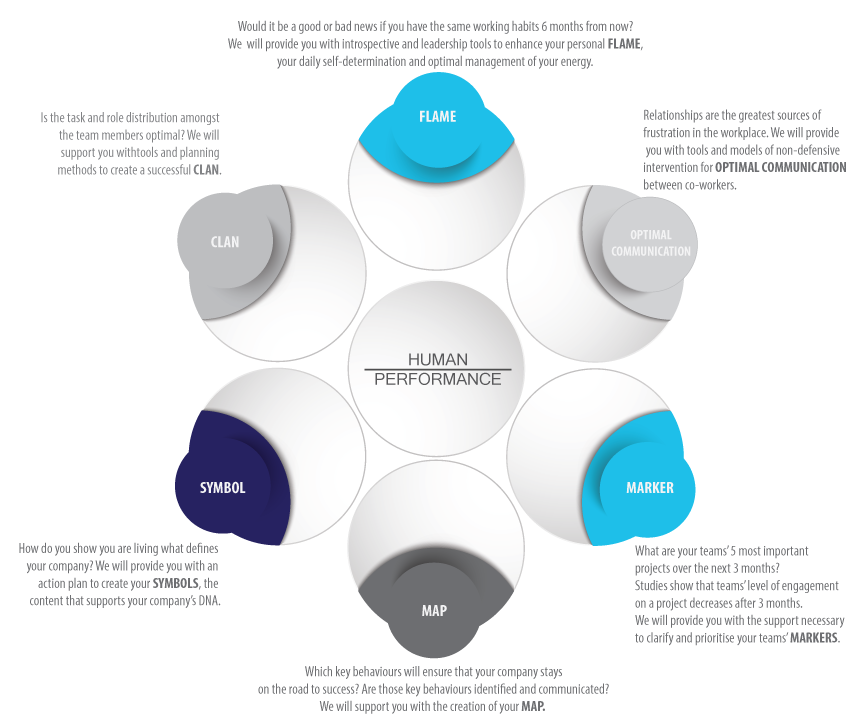 OUR PSYCHOMETRIC TOOL TO MEASURE
THE “ESPRIT DE CORPS”

The term ‘Esprit de Corps’ is often used in various spheres such as sports, the army and universities. What are the benefits of a strong esprit de corps for a company?
If your company has a strong esprit de corps, it means that your teams are mobilised to move the organisation forward and that your team members are interdependent, united and well-geared to exceed their limits and maintain a high level of performance in adverse situations.
Even though this term is used often, it has never been attempted to be integrated into a well-defined company setting.

Gilles Barbot and Dr. Poirel have drawn upon this to create a tool to measure a company or an individual’s esprit de corps through a questionnaire. This psychometric tool combines elements that constitute the phenomenon of esprit de corps in 3 distinct spheres:

Together: A belief in the team’s strength and pride as well as non-defensive communication.

This questionnaire enables our expert coaches to establish an organisational diagnosis to identify your objectives and obstacles.